The Music and Writings of Kira Lesley

I had a piece published in Oregon Humanities: Beyond the Margins reflecting on my time as archivist at the Southern Oregon Historical Society during the pandemic and the disastrous fires of September 2020. The piece is called “Preserving the Future: On Navigating Loss and Collecting Histories.” https://www.oregonhumanities.org/rll/beyond-the-margins/preserving-the-future/ 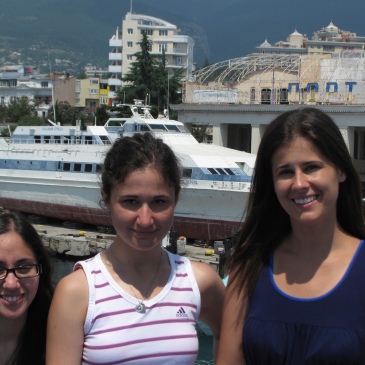 As the horrific invasion of Ukraine drags on, I would like to share with you a song that held great meaning for my grandparents, Peter and Helen (Sochansky) Stavrakis. “Dark Night” or “Dark is the Night” was a very popular and widely-known song in the countries of the former Soviet Union, although it is largely … END_OF_DOCUMENT_TOKEN_TO_BE_REPLACED

Let me be clear: my life and DMX’s life could not have been more different. But we did share something important: addiction, and spiritual longing. … END_OF_DOCUMENT_TOKEN_TO_BE_REPLACED

I study history for many reasons–to understand the present, to see what has been tried and what has succeeded, and because it makes me feel spiritually connected to my fellow human travelers, past, present and future. Sadly, I do not study history to ensure it does not repeat itself. Much as I wish it could, … END_OF_DOCUMENT_TOKEN_TO_BE_REPLACED

This is a New Year’s post that’s long overdue. When I was a kid, I occasionally wrote in a journal. But my compulsion to write everything I could possibly think of that had happened since my last entry, and everything I wanted to say, kept me from actually saying it. That has been the case … END_OF_DOCUMENT_TOKEN_TO_BE_REPLACED

I had the pleasure of seeing Janelle Monae on her Dirty Computer tour this past Wednesday at the Edgefield McMenamins. This was my first time seeing her live and it was awesome. Just getting to hear her do Jidenna’s part from “Yoga” was worth the cost of admission. But if you didn’t get to attend, … END_OF_DOCUMENT_TOKEN_TO_BE_REPLACED

I recorded a few Leonard Cohen songs after he passed away. In looking back, it appears I only posted them to my youtube and facebook, but not this, my official site. So, I am belatedly posting them here. I chose three of my favorites: Sisters of Mercy, Winter Lady, and Stories of the Street. The … END_OF_DOCUMENT_TOKEN_TO_BE_REPLACED

In the week following the election of Donald Trump, I have found myself pulled toward the former protest music of the white working class.  How did we get from Hazel Dickens to Donald Trump? Hazel Dickens spoke out against the elites, gave a voice to working class (whether they themselves were wage-earners or not) women … END_OF_DOCUMENT_TOKEN_TO_BE_REPLACED

If you missed my shows at Artichoke Music and Park Place Cafe, here’s a few selections for you. Both performances were a blast with great, engaged participatory audiences. Hope to see you next time!   How Can I Go Back to Boston (When I’ve Been to Tennessee)? (written by Kira Lesley) Ontario (written by Kira … END_OF_DOCUMENT_TOKEN_TO_BE_REPLACED 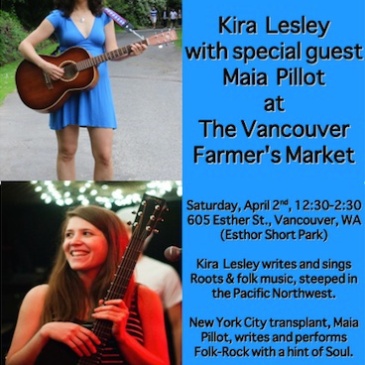 Come enjoy the sunny weather tomorrow, April 2nd, at the Vancouver Farmers Market at Esther Short Park. Special guest Maia Pillott and I (Kira Lesley) will be providing the live music from 12:30-2:30. It’s family-friendly and DOG-FRIENDLY. Over 200 vendors!